Our Hunts at Telkwa River Outfitters

British Columbia is home to over half of North America's current goat population. According to recent estimates, the number of Mountain Goats in North America has varied from about 75,000 to 100,000. This number includes 14,000 to 15,000 in the western states, 10,000 to 25,000 in Alaska, about 50,000 in British Columbia, and small numbers in Alberta, Yukon, and Mackenzie Territory. This puts B.C.  at the top when it comes to trophy class goat hunts.

British Columbia is home to the Canadian sub species of moose, these moose can be found anywhere from the heavily forested willow swamps to the high valley basins. During the calling season in Sept/Oct the bulls are in rut and in search of females, this can make for an exciting hunt! The possibility of a seeing a bull with antlers in excess 40 inches wide is possible, while he calls and thrashes everything in sight.

British Columbia is home to the largest population of black bear, estimated at 150,000 black bears province wide, making for some of the finest black bear hunting Canada has to offer!

Our hunting concession is located in the Northern coastal region of British Columbia. The landscape consists of sharply etched coastal mountains with pristine freshwater lakes and rivers. The famous Bulkley and Telkwa river systems run throughout our bear hunting area and are home to some of North America’s largest steelhead runs, providing an abundant food source for the Black Bears within our outfitting concession and in return giving us some of the largest bears British Columbia has to offer.

British Columbia wolf hunts are one of the most successful wolf hunts available today. Hunting wolves in the winter can be tough and take patience, it's often referred to as the pinnacle of ones hunting career when a wolf is harvested. Wolves are brilliant animals and hunting them is never an easy task. British Columbia is a game rich province with a diverse ecosystem that always maintains a strong wolf population, making it a top destination for wolf hunters. 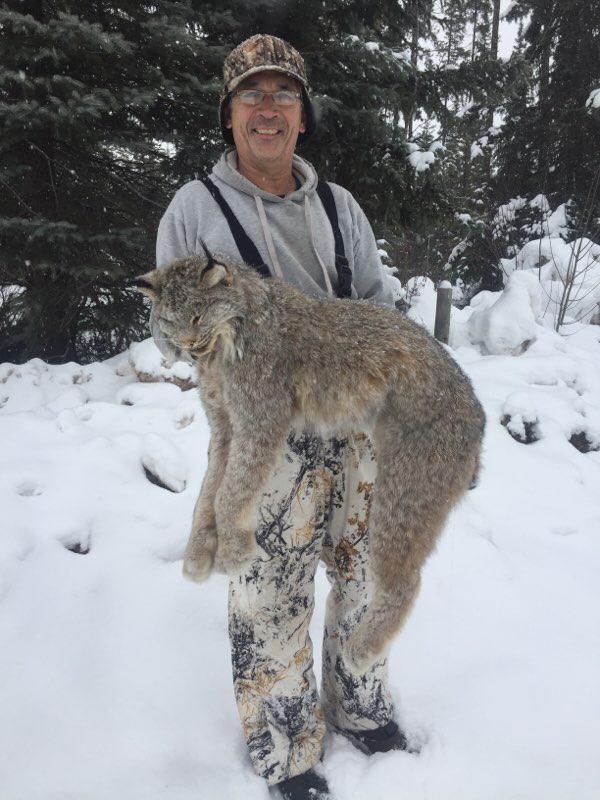 The Canadian Lynx is of the largest Lynx found in North America being slightly larger than a bobcat with weights between 15-40lbs. In Canada, Lynx hunting is only permitted within the province of British Columbia making this the only destination for hunters looking to harvest a mature tom. The northern coastal region of B.C. is known for its great densities of snowshoe hare, being the primary food source of the Lynx, making it the top destination for a hunter wishing to pursue a prime pelt in the depth of winter.